Throughout Fleet Week, thousands of visitors climb aboard amphibious carriers, destroyers and cruisers docked at the Embarcadero to get a glimpse into the day-to-day lives of the sailors serving in the U.S. Navy, U.S. Coast Guard and the Royal Canadian Navy.

Due to the Navy’s current operational security posture, we cannot confirm the names of ships participating in San Francisco Fleet Week until the ships are pierside. Thank you for understanding.

NO BACKPACKS on ship tours – full guidelines below

Ship biographies will be posted when the fleet arrives. LCU = Landing Craft Utility (LCU) is a type of boat used by amphibious forces to transport equipment and troops to the shore. They are capable of transporting tracked or wheeled vehicles and troops from amphibious assault ships to beachheads or piers.

LCS = is an Independence-class littoral combat ship in the United States Navy. The ship’s keel was laid on 29 June 2015, at Mobile, Alabama. The initials of New Hampshire Senator Jeanne Shaheen, the ship’s sponsor, were welded into the hull of LCS during the traditional keel laying ceremony. This LCS was christened on 7 May 2016 and launched on 12 May 2016. She was commissioned on 26 May 2018. MCM = United States Navy Avenger-class mine countermeasures ship. The Avengerclass ships were designed to have very low acoustic and magnetic signatures to avoid detonating mines. While most modern warships have steel hulls, the Avengers have wooden hulls with an external coating of fiberglass. They are equipped with sophisticated mine hunting and classification sonar as well as remotely operated mine neutralization and disposal systems. HMCS VANCOUVER = HMCS VANCOUVER is a Halifax-class frigate, of the Royal Canadian Navy, launched on 8 July 1989, as the second vessel of her class. She is currently based at CFB Esquimalt on the west coast of Canada. She is the third vessel to be named after Vancouver, British Columbia. All ship tours are free of charge

No events posted at this time, check back soon! 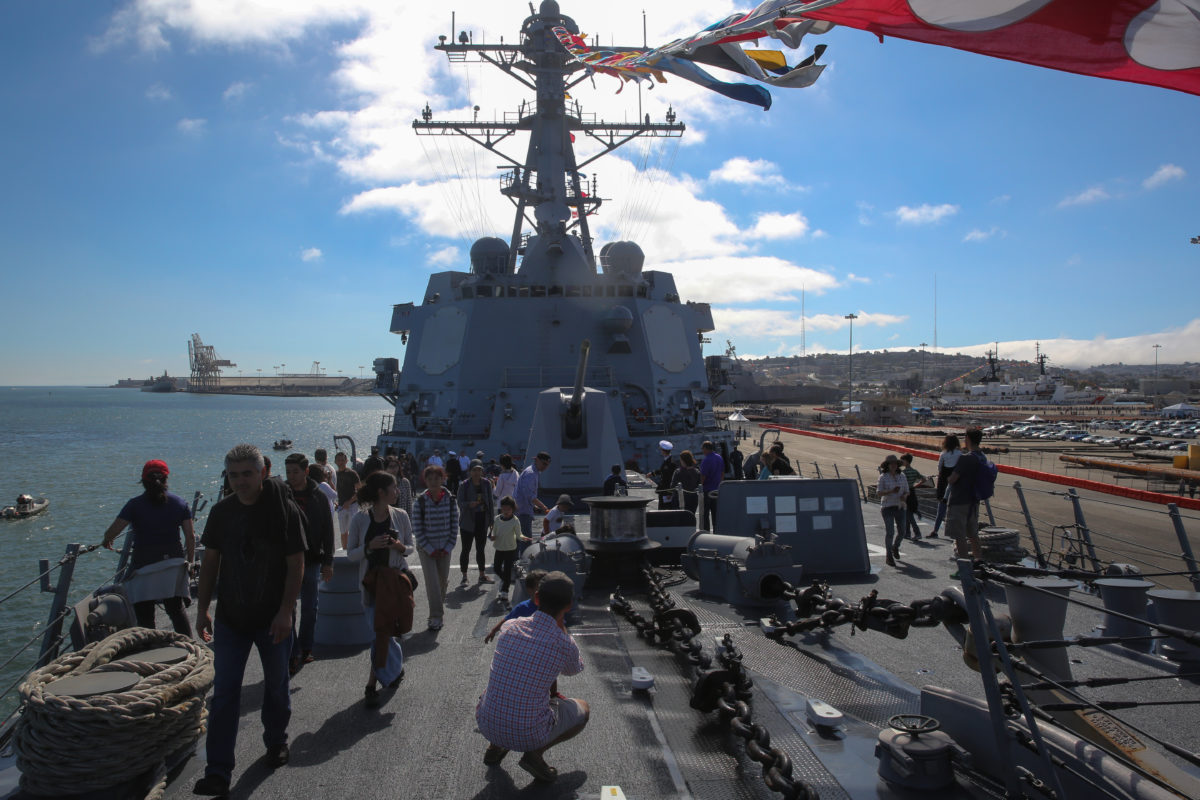 The public is encouraged to attend tours and interact with Sailors, Coasties and Marines.

When touring the ships, visitors are encouraged to bring as few items as possible when arriving for their tour and are recommended to wear flat-heeled, closed-toe shoes. High heel shoes are not permitted.

No pre-registration or RSVP is required; visitation to all participating San Francisco Fleet Week vessels is on a first come, first served basis.

All persons visiting the ships 18 years of age and over are required to show a valid state/federal government issued photo identification card.

Tours may not be appropriate for those with certain medical conditions. There are steep ladders (stairways) to climb and uneven surfaces to traverse during a ship tour, and thus, tours may be difficult for parents carrying young children

Valid U.S. Government issued photo I.D. required for EACH person 18 and over (i.e. Driver’s License or passport).  Entry without I.D. is prohibited.

Minors (17 and under) must be accompanied by an adult.

No children under the age of 7.

Open-toe shoes are not recommended.

Stroller parking is not available.

All visitors will remain with the tour guide at all times and will not deviate from the dedicated tour route.

Report any suspicious activity immediately to any military or police personnel.

All personnel are screened and all bags are searched before entering the pier.

THERE ARE NO HOLDING AREAS FOR PERSONAL ITEMS SUCH AS, BICYCLES, BABY STROLLERS, STROLLERS, SCOOTERS, PETS etc.

Due to security reasons, all such items will not be permitted to remain on or near the pier areas.

For security reasons, all such items will be removed from the pier and may be searched or otherwise disposed of.

All visitors must abide by these guidelines